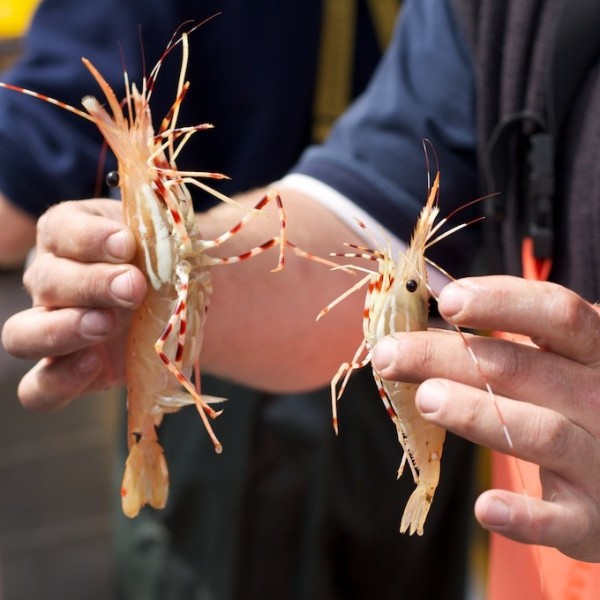 Wild BC spot prawns are a delicacy known around the world for their sweet, delicate flavour and firm texture. They are most recognizable for their reddish brown colour, which turns bright pink when cooked, defining white spots on their tail and white horizontal bars on the carapace.

BC spot prawns are the largest of the seven commercial species of shrimp found on the west coast of Canada. They vary greatly in size, with some larger females exceeding 23 cm in total length. Prawns are hermaphrodites: for the first two years of their lives they are males, and then they change to females. Typically, spot prawns live a total of four years.

In BC, approximately 2,450 metric tonnes are harvested annually, with about 65% of the harvest coming from the waters between Vancouver Island and the mainland.

BC spot prawns are available live during the harvest season, which usually starts in May and lasts anywhere from six to eight weeks. Prawn fishermen spread baited traps along the rocky ocean floor at depths ranging from 40 to 100 metres. This method has minimal impact on ocean habitat and very low levels of bycatch of other species.

BC spot prawns are very popular in Japan and the rest of Asia, with over 90% of BC’s commercial catch consumed there. Most of the prawns are frozen at sea by fishermen, and then packed and exported across the Pacific. The remaining few, however, are available to be enjoyed fresh in local BC restaurants and kitchens during the fishing season! Frozen spot prawns are also available in Canada year round.

Spot prawn stocks are carefully and sustainably managed to ensure that they remain available to enjoy for many years to come, including: